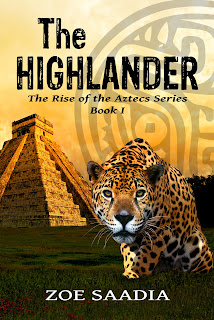 The Highlander, The Rise of the Aztecs Series,      Book 1
Author Zoe Saadia

The Highlander is a well thought out historical novel that portrays real people doing what their nation-tribes have done for years.  The main characters are young leaders breaking out into their own predetermined   adventures.
The elders are determined to control their situations in the world.  The young people (Coyotl, Kuini, and Izrac) rebel that world in their own way to change it for others and themselves.
Ms. Saadia brings this out in detailed conversations and confrontations that propels this intriguing developed story forward, keeping the reader’s attention.  The reader will not be bored with historical data.
The young people are the future and the only names that are important: Coyotle, the emperor’s first born son, wants to change the way things are done – social reform.  Kuini, the great warlord’s son, wants to change breakdown bearers between peoples.  Iztac, the princess, wants to liberate herself and others from their bondage to the way men think.
Zoe Saadia makes their points clear, using well developed conversations.  Although these young people are not Aztecs, they see common ground in others, where the elders don’t.  Especially Kuini, The Highlander, in his confrontations and communal exchanges with the only Aztec – The Aztec Warlord.  To a point, the Aztec influences Kuini’s decisions. Against the Aztec and his father’s wishes, Kuini becomes a warrior in Coyotl’s father’s army – their enemy.
In this end is a new beginning for Coyotl and Kuini, which may include princess Iztac. Fate will determine that end.
Saadia’s novel is an excellent lead in to the next chapter of the lives of these three young leaders.  I for one will continue to read the series, because of the enjoyable read of book #1.  Will you?

Posted by conniesbrother.blogspot.com at 3:20 AM