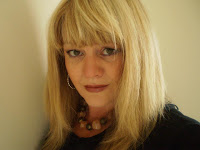 I live in the north of England with my husband.  What else would you like to know?  I used to run my own shop in the 1980s; I made a range of mohair jumpers.  My then husband was a goldsmith, and we sold his jewellery, too, amongst other things.  I lived in Northampton from the age of 2 until the year 2000, then on the North Norfolk coast until 2009 (wonderful place), then up here from 2009.  I hope you noticed how skillfully I have given those details, thus not revealing my age.  Joking – I am not coy about stuff like that!  I’m 96.  Oh, you mean you want to know about the writing?

Brief résumé: a few appalling stories and some funny stuff in younger days.  I wrote about 9 novels in the 1990 s.  Had interest in some of my work from an agent, but was too silly and stubborn to change it slightly to fit in with what she thought likely to impress a publisher.  I've always written funny stuff to entertain friends.  When I was working in Cromer Job Center I wrote a short play based on a day at work there, and my manager found it so amusing that he didn't tell me off for writing it in work time, and took it to a management meeting to show everyone.  He was a bit of a nutter, though (a very nice one!), and the others at the meeting were probably too ‘straight’ to be amused by it.  I've written four novels since 2010, which are on Amazon, and I’m in the process of writing the 5th , which is a sequel to the 4th.

No, but I’m sure it was ghastly.

Are you inspired by someone or something?

I've written about the people who've influenced more than once in other interviews, so I won’t repeat myself in case the same people are reading this one!  When I am writing a novel, though, I’m usually inspired by a concept about which I wish to write; for instance, in ‘You Wish’, which you recently reviewed on this blog, I wanted to write about the idea of destiny versus personal choice.  With ‘The Other Side’ I had decided to write about how the decisions we make in youth influence not only the next few years, but the whole path of our lives.  Once I know what the theme of the story is to be, it’s a matter of thinking up a story to illustrate it.

Suddenly having a great idea about how to make the plot better!   I love it when you suddenly have a brainwave!  I also love being able to write about subjects that interest me, and that I like to read about – for instance, people ruining their lives through addiction or obsession, grand passion type love affairs that wreck the lives of people around them – and more ‘light’ things, like rock musicians in pub bands, send-ups of the pseudo and the pretentious, the day to day problems facing ordinary people , the powerful influence of social networking sites.

There are four; as I said, ‘You Wish’ is about destiny versus personal choice, ‘The Other Side’ about possible alternative lives – it’s about what might have happened, had the main character made different choices.  ‘Nobody’s Fault’ is about the breakdown of a family after the father falls in love with another woman, and ‘Dream On’ is about struggling musicians!  All of them are set in the UK and mostly in the present, no longer ago than the 1980 s.  I’m aware all the time of popular culture and current trends when

I’m writing; for instance, ‘Dream On’ features both a TV talent show and a spot on The Jeremy Kyle Show, and the young women in ‘You Wish’ use Facebook, of course - Petra’s stalking of the chap she loves takes place mostly via this.  In ‘Nobody’s Fault’ there is a mysterious fake Facebook profile – and one of the characters goes internet dating.

What genre best fits for the books?

Contemporary fiction.  I used to say contemporary women’s fiction, but men read them too!

Oh dear, hundreds!  It’s only what I think, though; other people might disagree with me.  I don’t pretend to be an expert on anything.  But here are a few things that might help:

Don’t try to write like anyone else.  Write what you want, let Amazon worry about fitting it into a genre.

Don’t jump on bandwagons.  Be prepared to spend A LOT of time promoting your work, or it will sink without trace, unless you are very lucky.  Don’t think you have to have a blog in order to sell books, and if you do have one, write about something other than writing.  Accept that you will have to put writing before, for instance, going to the pub or watching television, if you want to get it done.  Learn how to tweet in such a way that it sells your books.  There is an article called ‘Twitter Tips for Beginners’ on my blog http://terrytyler59.blogspot.co.uk/2012/10/twitter-tips-for-beginners.html - many people have told me they've found it very useful – it tells you a bit more than the usual ‘how to use social media to promote your book’ type articles.

If someone tells you they've enjoyed your book, ask them to write you a review.  Don’t get stressed about bad reviews; not everyone will necessarily think your work is the best thing since sliced bread.  Beware of cliches like that one!

Where can people go to read your works?
http://www.amazon.co.uk/Terry-Tyler/e/B00693EGKM/ref=ntt_athr_dp_pel_1

Posted by conniesbrother.blogspot.com at 12:58 AM