Review of The Beginning 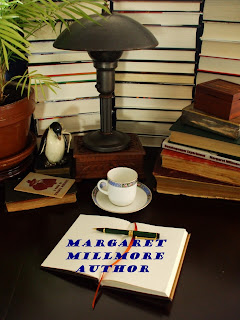 Margaret A. Millmore,
Author of The Four Series – Books I through III:


Can you tell me a little about yourself?

I’m a native Californian, and have lived in San Francisco since 1991 with my husband Bryan. I’m the author of 4 books; Doppelganger Experiment and Books I through III of The Four Series.

I take inspiration from everything I experience on a daily basis. However my early literary loves were CS Lewis, Ray Bradbury and Stephen King.

The Four Series: They do exist and they always have. They live, love, and work among us and they are part of us. But they are different too, they are stronger and they live longer. They are the topic of many books, movies and myths, but their existence remains a secret, not everyone would accept them. And like us, they have those that are simply evil. Keeping these evil ones under control is the price they must pay to continue the lives they love. They must protect their human brethren from the Dark Ones, those that would rather kill than preserve.

Century after century the good battled the Dark Ones, always prevailing and preserving the lives of their beloved humans. In the 17th century, two powerful Dark leaders emerged, they organized their forces and a bitter war ensued. It was a fight to the death and the good thought they’d won. Four warriors led the battle, four warriors whose strength was beyond anything they knew, four warriors whose legacy had to be protected…


The good formed a consortium and with the help of a powerful sorcerer, a spell was cast; a spell that would follow the warriors’ lineage in case their power was needed again. The warriors are long dead, but their heirs are not, and now they must fight. The Dark Ones have re-emerged, they are more powerful, more resourceful and they want to control mankind and the world.

The Beginning-Book I: Clare had an ideal life. She lived in the perfect little town, had a great family and four of the best friends in the world.  She also had nightmares, nightmares that plagued her for almost a decade. But these are not ordinary nightmares; they are premonitions, warnings of what is to come and what she will become.

She discovers that she isn't alone in these vile dreams; her friends are having them too. They are dreaming of their ancestors and their own future...  The discovery of their destiny and the future they must embrace is shocking and terrifying.


The Change-Book II:  Knowing that your life will change forever, that you will change forever is just part of what the Four must endure. Now they must leave their home and their families to journey to the fortress deep in the Tatra Mountains.  Clare, Sal, Sam, Collin and Kate will need to learn all they can to battle the Dark Ones and to survive the change and the inevitable loss of those they love. With the help of Charlie, the Elders and the community of vampires and werewolves throughout the world they hope to discover who is behind the Dark Ones and what their nefarious plans are for humanity.


The Battle-Book III: With the discovery of the Dark Ones’ leader and the powerful nature of his forces, the Four begin the battle they were destined for. They discover the full extent of their strengths and the strength of their vampire, werewolf and human brethren. But with each victory, they experience loss and although they may win the battle, the war would never be over.

The Four Series doesn’t exactly fall under one genre, initially it was a suspense/thriller, but because I do love vampires and werewolves, I decided to throw that in as well. It wasn’t my intention to make it suitable for young adults; however the series has appealed to both adults and young adults.

I’ve decided to try something new with The Four Series; I’d like to involve the readers in the creation of Book IV. I would love to hear what you, the reader, want to see happen in the next book. I’m holding a Reader’s Challenge which will run for the months of June and July 2013, submissions can be made via margaret@margaretmillmore.com – Every idea will be considered carefully and five winners will be chosen. Winners will be announced on September 10, 2013. Full details are available on my website at www.margaretmillmore.com

All of my work is available at Amazon.com (http://www.amazon.com/Margaret-Millmore/e/B005ME8QTQ) as well as other major on-line retailers. For more information, visit: www.margaretmillmore.com

I do hope you enjoy the series and would love to hear from the readers regarding their thoughts and ideas for continuation of the adventures of The Four.

Posted by conniesbrother.blogspot.com at 3:36 AM