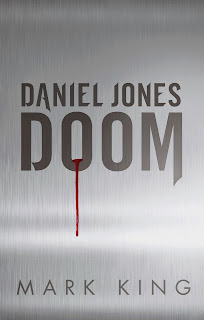 Mr. King’s SiFi kept me on the edge of my seat as its first in the series FRENZY did. However, Daniel Jones – Doom can be read on its own. I had the enjoyment of reading both.

What one believes in and the real facts of life are in conflict in both books. Belief in “A God” and “A Here After,” are the crux of most religions. In Doom, this philosophy is what keeps the common man in line and leads them to their Doom.

Daniel and his friends know the real facts of their lives’ existence, which is so hideous the common man in his brainwashed state denies. Daniel’s group strives to help free them from their fate called Achievement Day which is a misnomer.

In trying to save his father’s life from an Achievement Day function, Daniel and friends go through adventures that must be overcome to meet their goal - to live their lives free of an imposed deity whose origin is alien to earth. These detours will lead you to the end which may be a beginning or not.

It is fast paced and thrilling, Mr. King does his job by keeping you involved. He leaves you wanting to know: What will happen next? I do. How about you?

Posted by conniesbrother.blogspot.com at 3:50 AM