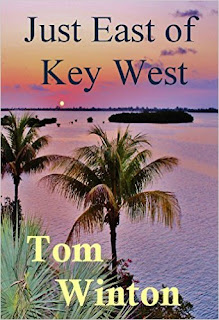 Even though I am not a fisherman, I was pulling on the line with the protagonist Frank towards the end. He has gone on a fishing trip passing by different characters on the wharf.

They are not the center of the story. Like in Hemingway’s The Old Man and the Sea, I got the feeling that Frank enjoyed his venture down to the sea. Without the sea, they would not be complete.

He gets irritated with those who don’t cherish the moment of fishing. Those are the people who don’t prepare for the event.

He gets upset with himself in the middle of this game in trying to catch a big one. He made an error in preparation and would be damned.

Whether he or the fish will be damned on the last pull of the rode will be known to you in the last paragraph of this fast-paced novella. Like me, you will get caught up in action.

Posted by conniesbrother.blogspot.com at 1:48 PM