Review of The Surgeon's Blade 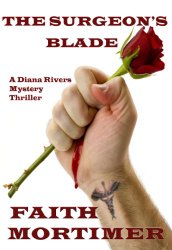 As many of my followers know, I love a good mystery, and The Surgeon’s Blade falls into that category. Ms. Mortimer’s writing style has me going back to her library of written novels for enjoyment.

In this Diana Rivers mystery, Diana is the relative of one of the main characters, Robert. He becomes infatuated with Libby, a nurse, after rescuing her from a yachting accident on Nigel’s sailboat, as an air ambulance medic.

Before and after getting to know each other, nurses are disappearing and murdered in Southampton and London, United Kingdom. The nurses, sisters, all have something in common that is the key to unraveling the mystery of the police’s predicament in not solving the crime spree.

Libby’s on again, off again fiancé Nigel is a doctor who works at each of the cities and has a home in London where his ex-wife has reappeared to compete for Nigel’s affection. Libby’s relationship with Nigel never seemed to be real for her since the accident, and she is about to call off the engagement.

This thriller takes off after the lead-up Ms. Mortimer has woven with few clues left for the reader, but they are there. Diana consulting with Robert brings us to an ending that will keep you on the edge of your reading seat.

The storyline pace keeps you engaged throughout leading to a thrilling ending.

Posted by conniesbrother.blogspot.com at 6:29 AM