Review of KISS ME WHEN I'M DEAD 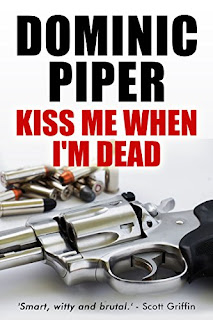 KISS ME WHEN I’M DEAD

Daniel Beckett is a detective that projects himself into the lives of many women who fall for his none committal aura. On his mission to find a beautiful missing young lady, Beckett, the smooth one, is interrupted in his quest by well-endowed and attractive women.

It’s not all play. The contract Daniel has with an old wealthy gun runner to find his lost daughter is complicated, and it seems she doesn’t want to be found. Some of her acquaintances give Beckett clues as to her whereabouts and extracurricular activity that is enjoyed by both parties if you know what I mean.

The twist and turns of this adventure will keep the reader engaged. You won't know who the bad guys are to the end unless you catch the clues.

Piper’s story is not erotica, but an enjoyable where-is-she. The surprising ending will be a hair-raising experience, which will bring the reader to thinking, "What is wrong with some people?"

The writing is smart, witty, and brutal as publicized. I add that it is also an unlikely endeavor that came across as near possibility. Beckett is a sustainable character but will probably die from too much sex in the third book in the series – funny, but true.

Posted by conniesbrother.blogspot.com at 1:19 AM