Review of THE PROFESSOR 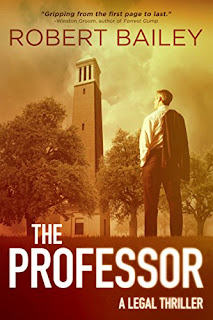 An Attorney at Law has many options during his career if his credentials are excellent. Tom McMurtrie was one of Alabama’s best, and after a short career as a trial lawyer circumstance led him to decide to become a professor at his alma mater; the man called.

Fast forward; a major accident occurs, Tom is in trouble at the University, and one of his recent students, Drake, who he had an altercation with is called upon by him to proceed with the case for the plaintiff.

Luckily, the story is not that simple. As the plot evolves, Tom's, his student's, and the people involved with the accidental crime infested case moves at a fast pace. The reader must pay attention to keep the characters and the events in their proper sequence.

This thriller is a page-turner: the characters are developing, and actions understandable; the backdrop of the case is constantly changing, and the alternatives of the plaintiff's lawyer’s case fluctuate as much as a yo-yo.

This legal novel is as good as it gets.

Posted by conniesbrother.blogspot.com at 3:25 AM