Review of Jack of Hearts 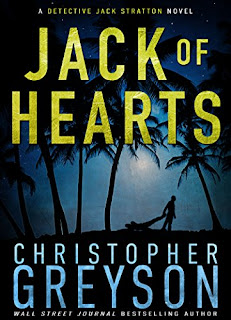 Jack, visiting his parents in a community for mature adults with his girlfriend and a large dog, is hoodwinked into solving a small crime wave. The mature adults are less than knowledgeable involvement.

Behind the petty thieves is hidden a deadly crime that comes to light because of Jack's probing and the mature adult's interference.  The large dog Lady, and Alice, Jack's soon to be, play their parts in uncovering the real crime which started when his parents and others returned from vacation cruise in the Caribbean.

The story has "It's close calls," mini adventures, and funny instances including a baby alligator confrontation. When mommy gator comes out of the water later, it's a big bite missed.

As far as a detective story goes, Hearts is a simple, straightforward case. I must have read too many mysteries because I solved the case faster than Jack.

However, the story was an enjoyable read with the introduction of Jack, Alice, and their big dog, Lady who stole the show in this book. All in All, I may read another of Mr. Greyson’s many novels.

Posted by conniesbrother.blogspot.com at 3:57 AM