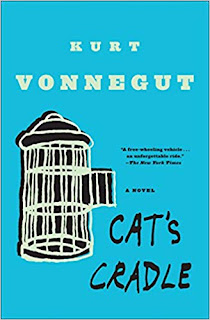 If you want to think and like satire, as I sometimes do, this read is for you. Not the thriller, mystery, or romantic type of novel one usually read.

The chapters are short chunks of defecation on humanity and where it is going - religion is all lies according to his invented religion Bokononism which is a lie too.  You will laugh but cry inside. Science sold and manipulated by man will destroy humanity – end of the world.

Global Climate Change was not invented science yet in 1963 when Cat’s Cradle was published. If Vonnegut were around today, I would think he would be a "denier," based on his opinions within.

Vonnegut's John is writing a book about one of the men who invented the atomic bomb. In his investigation and interviews with the man's children and others on an island, he confronts questions of why humanity goes on complicating itself.

When reading this novel, you should have some knowledge of the Cold War to understand Vonnegut's strong points of view which come through clearly in his dancing around the subjects of why we are who we are. At the time, nuclear war with the USSR was near. (North Korea and Iran today?)

This novel is a must-read for people who are intellectuals and those who think they are. Which are you?

Posted by conniesbrother.blogspot.com at 1:29 AM