Review of CHILD OF WATER 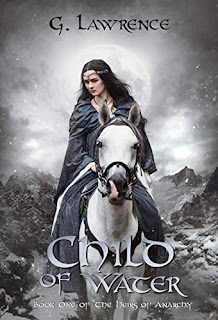 CHILD OF WATER
Book One of Heirs of Anarchy


'It is the continuation of the story that matters, not poor shades left behind,' is thought of Matilda, Lady of the English. The daughter of Henry I, the woman who wages war against men for a throne.

G. Lawrence writes this memoir of the English aged regent in the first person, telling her life's journey in a man's world. The words and thoughts of Matilda do not ring well against male domination in eleven hundred ten.

At age eight, she is married to the Holy Roman Emperor, where her education into regal life begins. Taught in their ways, she excels and learns how to use the power of the throne.

On the way to adulthood, Matilda spouts words of wisdom in colorful and intelligent ways. G. Lawrence writes those words that sing truths that apply today but did not then.

The turmoil’s the Empress lives with she overcomes in the Empire, but there comes a time when she must return to England. Life as a woman begins again until she is heir to the English throne. Or does it?

Matilda's words are musical and will stay with the reader throughout this enjoyable journey of the Lady's life. G. Lawrence has done an excellent job in combining History, Philosophy, and Renaissance of 12th-century norms into a pleasant novel.

Posted by conniesbrother.blogspot.com at 4:08 AM