Review of A VEIL REMOVED 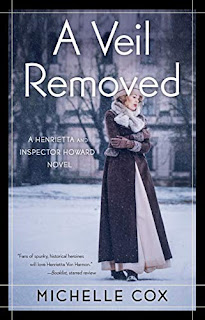 A VEIL REMOVED
A Henrietta and Inspector Howard Novel

Henrietta and Howard return from their honeymoon because of the death of Howard's father, the patriarch of a wealthy Clive family. No one believes his death was other than an accident.

"A Veil Removed' is book four in a five-novel series. Therefore, I have no idea how Henrietta and Howard meet. However, the author gives the reader hints as to the two different worlds from which they came.

Elsie, Henrietta's sister, love involvements, schooling, and social life, take center stage to the mystery of Howard's father's death and the mob business that led to it. But, when H and H get down to investigating, the plot thickens.

The 1930s background, and how wealthy people lived then added to the novel's distinct and colorful language brought the characters alive. Boy, life has changed since then.

The writing is fashionable to the time, which gives the reader a laugh once in a while. The story, however, lacks the mystery I usually enjoy - my fault.

I should have started with book one in the series. From the author's description of Henrietta and Howard, in this book, I believe the mysteries they solved in the novels one through four are worthy.

I will buy book one in the series, as should you.

Posted by conniesbrother.blogspot.com at 2:12 AM