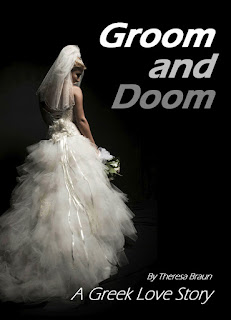 Ms. Braun writes very well about the love story of Angela and her Greek god Stavros.  One statement, in the Pre-Wedding part of the tale, says a lot about what will follow.  Angela gets a psychic reading that basically states the love affair won’t work.  She gets upset and cries – she cries many times in the story.  Her friend consoles her by saying, “Forget him (His reading.) There’re always Whackos out there.”

Well, I’m not saying Whacko is a word I would use for all the characters in this novella, but I would say that the main characters lack mental fortitude.  Angela is living in a fantasy world when it comes to her love for Stavros.  She loves the mystic of the Greek world he’s from.  To her, he is not like any other man she knows, meaning he is not endowed with the masculine side she sees in others she has dated.

What Angela doesn’t see is that he is not the man, who stands up for his own - his lover – first.  It’s not in his character.  He is lovey-dovey though.  This character flaw doesn’t come out until the Wedding Trip, where his father, Georgius, is the main “Axe hole,” as Theresa states towards the end of her story.  She doesn’t even stand up for herself or her family.  Fools and whackos fall in love for stupid reasons.  Who am I to judge?

The Love Birds are in Greece for their marriage.  All doesn’t go the way Angela or Stavros cared for, because his father presents problems every chance he can against the wedding proceedings.  A non-excuse in my mind is his wife died eleven months ago; and the family must mourn her death for twelve.  A Greek tradition is not properly revered and stains the whole wedding celebrations – end of world.

Everything else in this novella is secondary but important to the characters development: family members fight over who gets what – cars, rooms, places at dinner, background, setting, etc., while preparing for the wedding.  All could have been avoided if Angela asked Stavros one question when he said he loved her and asked her “Will you marry me?”  That question should have been, “Which is it, me or your family?”  A harsh question, but it’s a realistic one before getting married.

Ms. Braun weaves a good story that shows the naiveté and flawed traits of her characters to their fullest.  This novella is geared towards women and is not the type of book I would normally read, but I must say it’s a tear jerker that soap opera fans would love.

Therefore, I give this endeavor FOUR STARS.

Posted by conniesbrother.blogspot.com at 12:08 PM