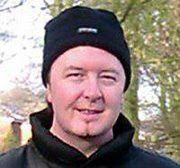 Interview with Mackenize
Brown, author of
The Book of Souls (An Imelda
Stone Adventure)

Can you tell me a little about yourself?
I’m a positive person. Very rarely do I suffer mood swings and I’m as happy as can be at present, living the dream as an independent author. I've always loved to read a wide variety of fiction and I love nothing more than reading a good book. I have many other interests. I’m a bit of a keep fit fanatic, I go running as often as possible and this helps my little grey cells get to work on something I’m usually writing. I also take part in a weekly keep fit club that involves an hour of intensive circuit training. I love the theater and movies and like most males I love sports, particularly football (soccer) following Everton one of the two Liverpool based premiership teams. I am happily married and have two teenage daughters.
Do you remember the first story you wrote?
The first properly constructed story I wrote was a rambling horror story, the title eludes me. It wasn't very well plotted or written and overly descriptive. But it was a start.
Were you inspired by someone or something?
I was always fascinated by the exploits of my maternal grandparents and the life they led before and during WW2. I promised myself I’d write their story one day and I did, but as yet this novel isn't fit for publication. My grandfather in particular was a man I looked up to. I still think of him as a personal role model. He was one of life’s true gentlemen.
What do you like about writing a story?
I enjoy the entire process. Getting the first and in my case generally rough first draft down on paper, followed by a process of molding and mending the text in a series of re-writes. These days I've also come to look forward to selecting covers and everything that involves getting a book to market.
Can you tell us about your book?
The Book of Souls (An Imelda Stone Adventure) was written for my daughters and is a book that can be enjoyed by readers from 10 years of age and upwards. I completed the original version some years ago, but always intended to publish it immediately after The Shifting.
11 year old Imelda Stone has always known she was different but could never understand why and on the day she and on the day her family move back to where her father lived as a boy, he takes her to one side and confirms what she has always suspected. She has inherited certain gifts from him, but she realizes quickly that he has disclosed this because something is worrying him. When he storms out of their home in the middle of the night and does not return, the Police presume he has drowned, but Imelda knows different. Voices from the old dry well confirm some of what she suspects, but she soon learns that a cunning creature older than time itself, means to have The Book Of Souls and she must stand in his way, to not only save her father, but the entire planet…..
I plan to write a follow up and already have an idea cooking in my mind.
How did you come up with the story?
If I’m honest I wanted to simply entertain my children. What started as a story, developed into a book and I’m pleased with the result.
What genre best fits for the book?
Young and Adult Fantasy
Are you working on something new at the moment?
I’m preparing the release of my next book, Lost Boys. Set in Liverpool during the political upheaval of the 1970’s, the story is told through the eyes of 13 year old Carol Blake. Unknown to Carol and her friends and most of the local community Delbert Walsh, a retired, world renowned detective is living in the area and is convinced young boys have been abducted over a 20 year period. The disappearance of his own son 5 years before and his inability to locate the boy influenced his heavy drinking and ultimately brought his illustrious career to a halt. But as we join the story Walsh is closing in on the scent….
I am also writing the first draft of a sequel to my first book The Shifting, that I call The Burning.
Do you have any tips for aspiring writers?
Write as often as you can if you enjoy the process. Don’t expect too much from your first draft, but try to finish everything you start and when the first draft is done, edit it until you’re sick of the sight of it.
Which authors inspire you?
James Lee Burke, Stephen King, Howard Spring, F Scott Fitzgerald, Dickens, Steinbeck, Carlos Ruiz Zafon, Peter Straub, Raymond Chandler, George Orwell and so many, many more.
Where can people go to read your work?
Amazon only at the moment, but both of my books are available for kindle and in paperback.
For US kindle go to; http://www.amazon.com/dp/B008036ZM6 & http://www.amazon.com/dp/B005F6DT98

Is there anything else you would like to share with your readers?
I would advise any aspiring author to ensure their work is as error free as possible before publication. It has never been easier for an aspiring writer to get their work in print or e-book format, but I have made mistakes that I have been forced to rectify and learn from. I uploaded a flawed version of The Shifting initially and will not make the same mistake again. A couple of bad reviews can ruin a books chance of success. Even as we speak I have employed the services of a proof reader for my current books and any future publications. As writers we’re blind to some errors in the text and I am only too aware that The Shifting and The Book Of Souls both still contain some minor errors that I can and will correct. We owe it to all indie writers to ensure our final versions are as professional as possible, but most of all to the reader who after all is parting with his or her hard earned cash.

Posted by conniesbrother.blogspot.com at 2:50 AM