Interview with B. L. Genteman 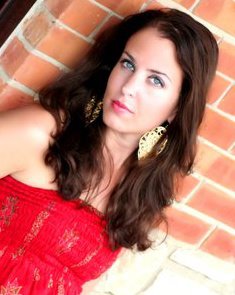 For the first nine years of my life my family lived in a log cabin and I learned how to ride a horse before I learned how to ride a bike. I once believed the show “Little House on the Prairie” to be relevant, but soon learned when I started going to school, that I was indeed the odd one out.  When our family did move away from the cabin, we moved to an even more rural town and to yet another farm.  I am the youngest of three sisters and the other half of a twin set.

I didn't write my first cohesive story until college.  It was for a myth class I was taking and we had to write our own creation myth.  I fashioned mine after a traditional Greco/Roman pantheon of Gods, but added in a bit of whimsy by also including a lot of characters and a plot similar to the Finnish epic, the Kalevala.  I really enjoyed the project, but up until that point I hadn't written anything much besides poetry and plays.

Initially I have always been inspired by the farm where I grew up and all of our parent’s animals that lived there with us.  The personality that our pets and livestock had been so varied and entertaining, it was hard not to write about them.  As I started to grow and develop my own taste in literature I was really inspired by a group of diverse writers.  Richard Adam’s Watership Down, Robert C. O'Brien’s Mrs. Frisby and the Rats of NIMH and Russell Hoban’s Mouse and his Child really stood out when it came to animal stories. I also enjoyed the works of Kipling, Tolkien, Grahame, Twain, Hemingway and Wolf.

I really enjoy creating a character.  I always want to make sure that they are different and unique that after a while they start writing their own story and I follow where they take me.  I try to think of ways to make them their own and as outrageous as possible.  I want to entertain myself while writing it as well as the audience who reads it.

The story starts off with a young lamb who is bullied and unhappy where he is.  Ryeland is often lost in daydreaming and one day they come true.  He and his young sister get swept up in this nautical adventure with a band of animal pirates where he learns about courage and determination.  In the end he is molded by this phenomenal journey into a young ram with strong character and knowing he is greater than any obstacle. I don’t want to give too much away, I believe that everyone is going to take something different from the story, but that this is the underlying theme for The Sheepish Pirate.

I would put it under Children’s, around middle grade level, but I don’t want to limit it to just that age range.  I feel that it could also fall under general fiction/fantasy.  It also has strong historical references; I would also place it into historical fiction.

Always write your story.  Write what interests you and tell it in your voice.  The moment you start questioning yourself and watering down your story for others is the moment your writing loses integrity.  Just be honest with yourself.

Currently I have my book available on Amazon. http://amzn.to/YAITlP

I’m always interested in feedback from everyone.  Those who liked the book, hated the book, which characters they liked and want to see return.  I am always eager to hear what everyone thinks and try to be responsive to everyone’s comments. I try to have every type of social media option available so that the audience can pick and choose how they want/wish to following me.

Posted by conniesbrother.blogspot.com at 11:05 AM