Review of The Dragonfly Door

Review of The Dragonfly Door
Written by Margaret A. Millmore 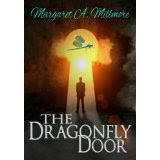 The story told by Ms. Millmore, in her novel The Dragonfly door, is one of true fiction. She has stretched the reader’s imagination, bringing them to the edge of reality with a thrilling story that keeps you reading on, and on.

Each time the door is opened or closed a new twist is brought to light. Traveling with the speed of light in and out of the door, the main character learns more about why he was placed on earth and how his life has an effect on those that follow him after he makes a decision.

A conundrum, we all try to solve on a daily basis is how what we say to our children will affect their lives and our future with them, is placed in question. In her tale of the unknown, that gap is bridge and revealed somewhat.

This revelation presents eventful situations for the main characters where they meet the future. One of their own, in the present, has contaminated the world with a virus, leading to why one of the doors was opened in the first place.

You may be confused at first, but Margaret brings it all together with exciting prose, beginning with a man who is put in a psychiatric ward to the acceptance that that man and his mission is needed to save the world in the future. But, he is a lunatic. Or is he? You’ll have to read The Dragonfly Door to find out.

This novel hits all the right buttons: entertaining and gripping. A fine read over three or four sittings.

Posted by conniesbrother.blogspot.com at 12:30 PM