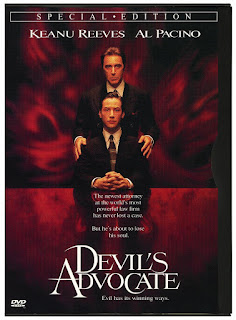 This intriguing movie about the devil being a lawyer brought all the sins of the world into play. I don’t have to name them. Do I?

Reeves, a Southern lawyer, and his wife Theron have a hectic but loving family living in a small Florida town. He is a winner; never losing a defense case in his 32 case career. She, the typical caring wife, wants a child and what is best for her husband.

After winning the 32nd case of a guilty person is over, they get an invitation one does not refuse – a chance to move to Sin City, New York, New York, USA.  He wants the advocate's position because of his vanity and pride, while she is motivated by greed, having things she would never attain in Florida.

Pacino is the owner of a wealthy law firm who dangles the carrots. His background had crossed paths with Reeves mother before his birth, and that is the reason for his wanting Reeves in his employ to take over the firm.

The story builds in suspense from the day the couple arrives where they cross paths with all the seven sins, as Reeves mother had experiences when she met Pacino. She became a 'Born Again' Christian because of it.

I don’t have to tell you who the devil is. His interface with all the movies characters will give it away from the second act.

The twist in the ending of this not so complicated, but visually compelling movie will keep your eyes looking at the screen. So make certain, there are no distractions when you watch The Devil’s Advocate.

Posted by conniesbrother.blogspot.com at 6:44 AM