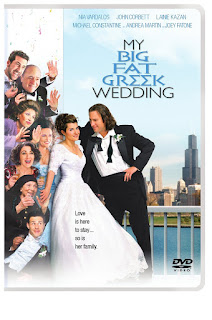 If you haven’t been consumed by one particular ethnicity, you may have lost the opportunity to understand how a patriarchic system works. It has its benefits and its faults.

In the My Big Fat Greek Wedding, the Greek culture shows its good and bad side. That patriarchic system gets melted into the American culture of love who you want, ethnicity is damned.

WASP boy meets Greek girl spinster. She wasn’t noticed when they first met in her father’s Greek restaurant, but after her Americanization, her beauty is seen through a clearer window.

He finds the strength to walk into the Travel Agency she works in after she had freed herself from the Greek culture that was controlling her life. Both have the inner strength to love each other, damn their background.

He gives in and is christened in a Greek Orthodox church, showing his love for her and her culture which stimulates him. His family goes with the flow.

Sounds boring but the flow was upbeat with a few slow parts, because of the Greek patriarch’s interference in the romance. They live happily ever after in the house next door.

The acting of Nia Vardalos and John Corbett was above par - not Oscar-worthy, but they made the file work. The supporting case

Posted by conniesbrother.blogspot.com at 9:15 AM