Review of Bang Bang You're Dead 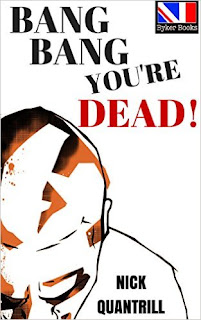 This British Collection novel is written in an English dialect which may offend some. However, its reality is compelling.

The life of a released from prison murder is highlighted. He returns to his hometown to find out what happened to his brother, who seemed to have overdosed on drugs.

Unfortunately, his return embeds him in the criminal element he wished to avoid but grew up within. His journey is to free himself from that part and find out what actually happened to his brother.

The dialectic prose may be confusing to some Americans, but the storyline and characters drive this miss-adventure. It is fast-paced, and the personalities are down to earth but somewhat delusional in their concept of what is the good life.

This book will lead into areas that exist in the underbelly of many cities, where power lies in the hands of a few criminals. An adventure I enjoyed reading.

Posted by conniesbrother.blogspot.com at 12:55 PM