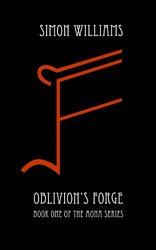 
I have mixed feelings in writing this review. On the one hand, I know it’s a difficult task to write the first book in a series, but on the other, I believe it is the author’s duty to make it simple to read, so it will be a good launch for the series.

Oblivion’s Forge is not the end but the beginning of the Aona Series. Mr. Williams does an excellent job of developing his characters and plot. However, he has not made it simple for the reader – his audience.

As an avid reader, I got lost in the many unconnected plots until the end, which was a long time coming. I would have liked to have read a shorter version with fewer characters to follow.

When readers get to the final page, they will be left wanting more, because of the fascination of the subject – the beliefs of the human race, and how those ideas forge us toward our own oblivion – death. They may want to reread it to get a better grasp of the interwoven plots.

Posted by conniesbrother.blogspot.com at 6:51 PM