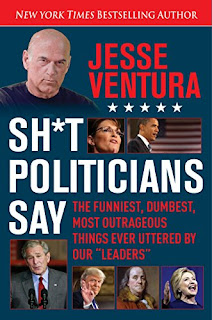 Just this last year after many years of being apolitical, I looked, studied, and journalized my thoughts. From this evaluation, I wrote my white paper ‘Sixty Days To the End of The USA As We Know IT’; and during that time I read Jesse’s book.

In my published white paper, I used a few of his book’s quotes. I did this because they were within the scope of it.

Jesse’s SHIT POLITICIANS SAY is funny and informative. If you are interested in politics, this is a book to enjoy and use when in conversations with friends and families today.

Most of the quotes are forgotten but still apply to the present day’s elections in the USA. It seems that what goes around does come around again.

Example: “In America, you have a right to be stupid…” part of a John Kerry quote as secretary of state on his first trip in 2013. Can you believe it? It’s true he said it.

You’ll have to read this fascinating collection, which includes quotes from Hillary Clinton, Donald Trump, and presidents back to John Adams.

And, who can forget Bill Clinton’s …it depends on how you define is, is?


Posted by conniesbrother.blogspot.com at 6:31 AM