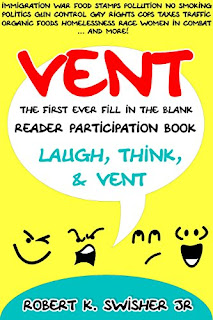 I'll give you a penny for your thoughts. No, I won't. But, Mr. Swisher Jr. in his book VENT will ask you questions you'll have to think about before answering or not. It’s up to you.

However, the questions intertwined throughout this simple, enthralling encounter of two men - one in route to the airport after a funeral and the other a well-known local character who speaks his mind. Unlike most meetings, theirs is unusual and funny.

They talked for hours about serious subjects, and not so dangerous ones. While they are conversing, the author asks your opinion about those items that will make you think.

Of course, there is no interaction with Mr. Swisher, but you'll enjoy the book if you come clean with your thoughts. And I believe you will learn something about yourself or not. It’s up to you.

Sometimes I just laughed and moved on. Other times, I stopped and thought.

I found the story enjoyable as presented and my venting along with the two characters was hilarious, compelling, and thought-provoking. I wanted to answer more questions, write my own, or write chapters in the blanks, hoping the men conversed more.

It's a new concept which kept me involved. If you want fun, purchase at Amazon: http://amzn.to/2f9WVNZ

Posted by conniesbrother.blogspot.com at 2:21 PM