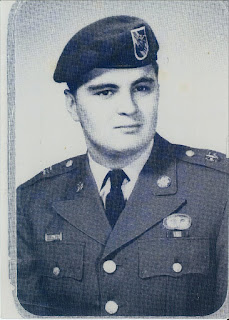 Me, before going to 5th Special Force Group, Vietnam, as Operations and Intelligence Specialist in 1969.

I have been dealing with uninformed banter all my life.

"You are stupid for voting 'None of the above.'
You're voting  Trump." A man said to me at my local bar.

Well, I am not going to give the whole conversation. But the person who called me stupid was and always is a Democrat. He was heavy on the verbiage about the Republican's nominee character but very light on the issues.

I noted that one: The Democrats and the Republicans gave us flawed candidates who were not my fault because I am an Independent voter and could not vote in the primary. He didn't know that fundamental issue - Independents are not allowed to vote in Florida primaries.

Moving on two: I think both of the candidates are flawed and would lead into war, Clinton because of her hawkish and globalist leaning, i.e., opens borders and receiving money from George Soros. The person agreed with me when I said Trump was useless and uninformed. However, he had no idea who Mr. Soros was.

Again, the man didn't know of the issues. His only basis for voting Democrat was that they were for the working man. He could not back it up with fact.

And with many women, most real issues don't matter, only the fact that Trump is a male chauvinist pig warrant attention when they vote for President of the USA.

John Kerry, a Democrat and Secretary of State, another Obama appointee said at his first meeting with the UN, https://www.youtube.com/watch?v=qQxV9ua9jLw
, you have a right to be stupid in the USA. He is an Elitist like his boss and Hilary Clinton if you feel Americans are stupid.

God Bless America and boy do we need it.

Purchase: Sixty Days to the End of the USA as we know it:

Posted by conniesbrother.blogspot.com at 8:26 AM