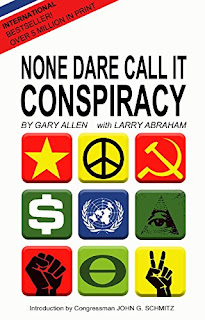 None Dare Call It
CONSPIRACY

When I saw this best seller at a Paper Back Bookstore, I said to myself, “WTF?” ‘Conspiracy – who, what, where, when, why?’ Went through my head. I bought the worn-down paperback for $2.

These gentlemen outlined a plausible takeover of the world by members of The Council on Foreign Relations (CFR). Rooted in World Banking, they perpetuated the concept of Socialism and controlling the world population with their oligopoly pulling strings.

This conspiracy started with names of men you know – Rothschild, Morgan, Rockefeller, and their families’ hand-picked wealthy cohorts over the centuries. Their banks and ancestors bankrolled warring parties, sometimes both sides of the battle, and presently control the world's currency movement.

They unscrupulously manipulated politicos and news around the world to keep them as the Established Elite. Allen and Abraham’s short discourse is up to and including the Nixon Administration.

The author of this review has done some precursory study of present-day politics (2010 -2016), and has found that CFR was active in the Obama Administration, but not so in the new Trump government. This will be discussed at another time on my new Website.

What I will say is that this book fills the gaps in my understanding of what happening in the world and to me via Vietnam and college where I read CFR’s quarterly Foreign Affairs at our campus library. At the time, 1970 –’75, I could not understand their interpretation of the affairs of the world. I know now – it was propaganda to perpetuate CFR’s cause to rule the world – A CONSPIRACY?

You tell me: http://amzn.to/2jK241Z Book sold over 5 million copies.
Posted by conniesbrother.blogspot.com at 2:05 AM