Review of Once Gone 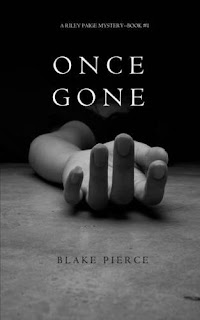 ONCE GONE
A Riley Paige Mystery-Book 1

There is a mass murder out there - A story written about many times with different twists. And there will always be new ways of killing a human in the future.

What makes Mr. Pierce’s mystery different is the introduction of Riley Paige, a working divorced women FBI agent. The murders are predictable in the genre. A man with a deranged mind kills women and places them in a doll-like position for the police to find.

It’s the Riley character that is unpredictable in her gut feeling evaluations of the crime that leads to a conclusion. She is also was a crime victim of another deviate which at times clouds her movement.

Her partner, Bill's involvement, is somewhat supportive. However, it's Riley’s out of the FBI Box thinking and decorum that cuts through the protocol which gets results. Her character is compelling.

Mr. Pierce has developed a character that readers will enjoy when reading forward in the series. And, the author’s final mysterious note on Riley’s pillow leaves the reader wanting to know what next could happen to her.

I think I'll come back and read Book 2.