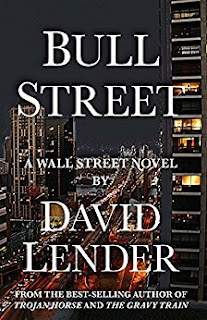 The world of Wall Street in New York City is unlike any other financial district. It is the heartbeat of America's clock on how its livelihood is functioning.

We and the world watch its fluctuations daily. In Mr. Lender's novel, he writes about people of The Street who make it work, albeit corruption of that system is the central theme.

Lender's protagonist Richard arrives in NYC for interviews, and coincidently meets one of The Street's Tycoons before an interview to work for an investment banking major player. It takes a while, but he lands the job.

From there on, the story moves at a fast pace. Richard's abilities and likeability move him into a position of intrigue after encountering a discrepancy in company trading E-mails. With a woman cohort, they investigate and document their findings.

Entanglement with the government becomes a fatal problem for the two, because of the criminal environment that surrounds them and for being honest in their endeavor to uncover the sender of the E-mails. International factors and the Tycoon's involvement brings down the house of cards, so to speak.

The story's ending is a show stopper, putting the reader on edge, anticipating murder or vindication. This novel is enjoyable to the end.

Posted by conniesbrother.blogspot.com at 4:44 AM