Review of An Enlightening Quiche 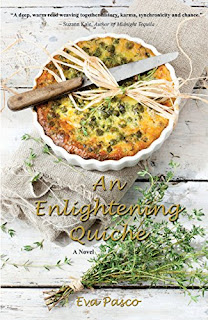 Augusta and Lindsay come from two different worlds. Augusta born and bred in Beauchemin, a small Rhode Island town, and Lindsay, a historian, who resides in Boston, Massachusetts, cross paths because of Beauchemin's French Canadian historical past.

They tell their stories in alternating chapters in somewhat of a soliloquy style with discourses and bantering monologs about past lovers, friends, family, and the people of Beauchemin's. Augusta is an administrator in the town's main factory. Lindsay changes residence hired to investigate into the historical value of it.

Their storytelling was somewhat lengthy at times but entertaining and insightful into the town's array of characters whom Augusta knew personally, a few biblically. Lindsay, in her research, finds a new home from the chaotic Boston lifestyle. Both stories converge on Augusta's childhood friend Estelle's prominent family that owns the factory and a young child's life-changing tragedy.

The bedroom tales, a disaster in a child's life, a Quiche Contest, and Estelle and Augusta's hidden past, Ms. Pasco details with comedy, drama, and enlightenment into the past of relocated hard working Canucks. Her writing is intelligent and easy to digest after getting into the rhythm of her sometimes-elongated sentences.

This Quiche was humanizing from a woman's point of view.
Purchase: http://amzn.to/2ud5vQd

Posted by conniesbrother.blogspot.com at 2:38 AM