Review of Murder & Spice and Everything Nice 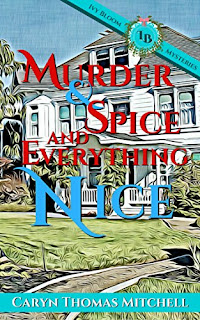 MURDER & SPICE AND
EVERYTHING NICE

Ivy Bloom moves back home to open a bookstore with her sister. That mansion is the backdrop for some strange murders that interrupt the opening of a store that has room for every genre - Kitchen, cookbook, etc. - you get the various divides.

During the final preparations, people come knocking to see Ivy. One being, what seems to be the leader of a cult, looking for one of his disciples who had visited the building earlier.

Minutes later, the whole town is put into a frenzy which includes a major property fire. It's not Ivy's best interest to investigate what is happening; warns her childhood friend, who is now the detective in charge of solving the crimes.

Ivy, being Ivy, a snoop, and a mystery writer to boot, doesn't listen to his admonishes. She, with her sister's help, digs deeper into the crimes leading to a potentially deadly event.

Does Ivy get her man or is it the straw that broke the camel’s back? On the local beach, a man with a metal detector helps her reach her fate.

Ms. Thomas Mitchell's writing is snappy, comical, and connects the dots in this fast-paced Ivy Bloom Mystery novel. I was surprised that it was over when it was with a knockout finish.

Posted by conniesbrother.blogspot.com at 3:10 AM