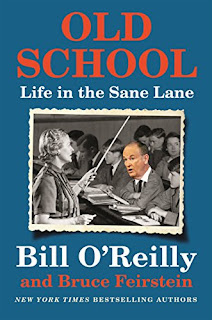 'It is not often that people learn from the past, even rarer that they draw the correct conclusions from it.' I paraphrase Henry Kissinger who, by the way, is not one of my favorite people. However, his words are related to O'Reilly and Feirstein's thesis on human conditioning.

With the loss of truthful history and discipline in our schools, Old School values of the past are in the most cases lost in American culture. The authors wove into this book their knowledge of their cultural growth intellectually, using short stories of each families' past.

Many of those stories resonated with me. I am a Baby Boomer who lived through the same period, albeit I served in Vietnam where my core values changed somewhat. Participating in war does that to you.

Snowflakes, however, live in the now and won't look at the psychological development of the past to add value to their life, unless there are core family values already installed. It’s an endeavor losing ground, according to the authors.

Unfortunately, this declarative historic on values will be only read by Old Schoolers and maybe psych majors who want to understand human conditioning. Americans are being conditioned at a faster rate today than in the 60s, 70s, and 80s via sound bites. The authors allude to this conditioning.

I enjoyed the read because I am Old School. Buy at http://amzn.to/2wFr3pL
Posted by conniesbrother.blogspot.com at 4:25 AM