Review of ON BULLSHIT 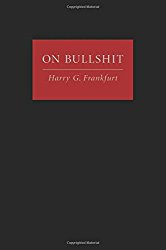 Humbug, Lies, Short of Lies, Bullshit, and Pretentious Bull, are among the items that Professor of Philosophy Emeritus at Princeton University Frankfurt discusses in his book/thesis on how humanity has conducted itself when covering up something it doesn't want to reveal. His work is apolitical but resonates in the multi-media world we live in today 2017.

Not mentioning names, he notes “that the contemporary proliferation of bullshit has deeper sources in various forms.” I believe he is referring to the TV news media, Facebook, Twitter, and all opinion driven outlets.

Frankfurt's definition of the above mention shades of deception is clear and easy to digest for the average reader. However, the thesis is more appropriate for an academic audience, i.e., college Philosophy majors.

Somewhat humorous, Professor Frankfurt keeps the reader's attention in this short but dangerous work. The reader may, after reading and analyzing "On Bullshit," reevaluate their rhetoric, that of the talking heads in the TV media, and fellow humans.

I read the thesis twice before this review. It’s only 81 pages.