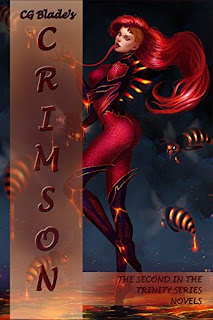 Conspiracies have been abounding since JFK's murder. They have multiplied over the years into all realms of conjecture. When a real one exists, will we recognize it?

It is 2076, Blade's heroine of book one of his trinity series, Petra, a Cobalt semi- A.I., comes out of a four-month state of rehabilitation to find herself confronted with a Conspiracy against the USA. Who or what is behind it?

The North American Continent is being attacked by numerous disasters that scientifically is not explainable. Petra is given the task to get to the root of the problem.

With her new programming including a humor side, she and Ter, her computer counterpart, confront the evil attacking the American way of life. In that confrontation, Crimson, another semi- A.I. and a company of characters have become an enemy that is formidable.

The battle is on an international scale and me, the reader, marveled at the ingenuity of the weaponry. The exciting result appeases me for a moment until learning that it was not what it seemed to be.

The caveat is set to entice the reader to want more of the action, characters, historical notes, the humor, and the battle against a Conspiracy.

A great transition for this Trinity to keep the reader interested. Cobalt set the stage for this Sci-Fi Thriller.  My review: http://bit.ly/2t37BVC

Posted by conniesbrother.blogspot.com at 2:33 AM