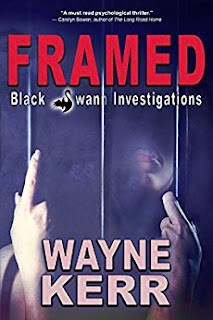 Reggie is the Black Swann. How she got that name is an interesting fact, as is that she spent prison time for a murder that Reggie says she didn't do. All criminals say that, but was she FRAMED?

A hearing finds, on some technicalities, that there is enough doubt that Reggie did commit the murder. She is sent back out into the world. Returning home, the Black Swann, an ex-detective, is asked to investigate a murder/disappearance by the people who helped set her free.

Using her abilities and the help of new friends, Reggie goes about trying to help a man she feels killed his wife. Although there is no corpse but evidence that a crime has been committed, she has a feeling. Has he been FRAMED also?

Little bits of evidence lead her in a direction that is highly unlikely by all concerned. However, when the information is put together by another, a shocking result almost cost Reggie her life.

This novel has strong supporting characters and is an excellent first book in a series for the Detective genre. Black Swann Investigations will go on and solve more crimes with style and creative themes.

Posted by conniesbrother.blogspot.com at 2:25 AM