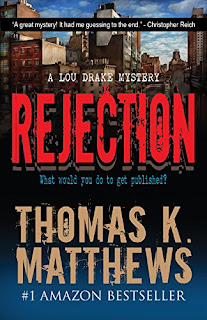 What would you do get published by a major house? Murder to become famous?

Lou Drake, at one time, was a detective. He got demoted to paroling the city with a partner, screwed up and was sent to The Cage for the few months he had left on the job.

How he got demoted is a significant part of his story and the background to this novel. He was a meticulous sleuth before he messed up a murder case. Why, is the unknown?

While working in the holding cage, a serial killer is on the loose who is murdering literary agents in unusual ways. Drake, a writer who can't publish his novel but keeps on going, starts to use the crimes as the basis of his new endeavor.

The events that transpire after he starts writing and investigating this string of killings upset the city police department where he works. The FBI joins the fray leading an investigation of the department.

How that end is an exciting and rejuvenating for the reader and Lou Drake's future. Not all ends well, but you, the reader will want to read more of his mysteries.

This is a book one of a series, but I don't see what characters will be carried over to two.

Posted by conniesbrother.blogspot.com at 1:24 AM