Review of The Intuitionist 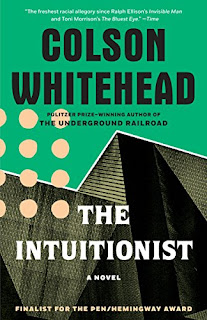 The Intuitionist: A Novel

The Intuitionist is the story of bias and racism in the world and a profession one would not think of - city elevator inspection. A woman of color becomes the first woman of color to get a badge as a City Inspector when new elevators were going up and down all over the city.

Lila Mae is an Intuitionist, which has a 10 percent higher accuracy in evaluating elevators as opposed to an Empiricist. Intuitionists are a negative group according to the guild, who don't believe you can communicate with an elevator.

One of Lila Mae's client's mechanism does a dead drop which leads to a significant professional upheaval. She turns into a sleuth to find the cause of the accident, hiding from the public and her cohorts.

In her investigation is a tale of corruption, deceit, bias, white male domination of a profession, and union battles. Where her story ends, is a surprise, the reader will applaud.

Articulate prose with racial allegories. Metaphors that will delight the reader, and images relating to a mundane subject as an elevator that is disturbing but understandable.

Intuitionist is an excellent read for the thinking mind.

Posted by conniesbrother.blogspot.com at 2:32 AM