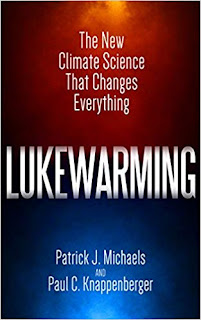 LUKEWARMING
The New Climate Science
That Changes Everything

I have listened to Main Stream Media and heard many debates concerning Global Warming over the last fifty years. Moreover, when President Donald J. Trump pulled us out of the Paris Accord, I started to think about it again. Was he right in doing so?

LUKEWARMING came up in an interview. If you hated President Trump, like many, you would call him and others "deniers" and pay up accordingly to an agreement, not a treaty that President Obama signed because he could not pass it through Congress.

The wording of the original document was President Obama's dilemma. He signed another executive order in essence. Hail to the Chief.

The two scientists from the CATO Institute who penned LUKEWARMING, in so many words debunk the notion that the world is in danger of over warming to the point of the coastal loss in Florida (a 1989 prediction by Al Gore and others) and other HOT predictions. They write their truth about those government paid prognosticators whose "Sky is falling" ideas brought the craziest surrounding their predictions.

Using mathematical and logical comparisons, these CATO scientists present a simple understanding of what is happening to the earth that an individual like myself can understand. You will find too.

Cut to the chase: President Trump is right as these scientists suggested before him taking office - the Paris Accords would hurt only the USA and the EU. The rest of the world would receive funds for the wrong reasons.

Easy to read, with short paragraphs and uncomplicated descriptions of their observations. The read is worth the price, but it should be free so people could know the truth.

Posted by conniesbrother.blogspot.com at 12:27 AM