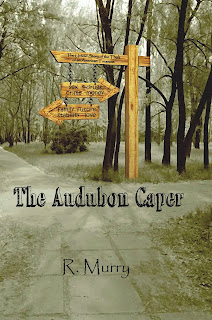 The Audubon Caper: Untold Story of the Theft of an American Treasure

R. Murry’s The Audubon Caper was a fast-paced story.  There are so many things going on in this creative non-fiction tale.  One of the greatest things about this book is that it’s based on a true story.  I kept thinking about that as I read, noting that definitely truth can be stranger than fiction.  Murry’s writing lets us really get to know him.  He’s frequently very open about his thoughts and feelings throughout the tale, something I really enjoyed.  We see him get caught up in drugs, booze, and sex, very fitting for the 70s scene—yet he graduates from college and accomplishes a lot, such as surviving Viet Nam and a number of other military feats.  Some other adventures include running drugs and flying off to Haiti.
The story keeps us on our toes, shifting from the present and going into the past, and around again.  Murry tells us one of the reasons he gets involved in stealing the Audubon paintings is because of being loosened up by cocaine and scotch.  His rich college buddy van Zandt ends up roping Murry into the theft by using the powers of friendship.  In addition, Murry has vowed to van Zandt’s father to keep an eye on him, keeping him out of prison.  We see Murry getting in way over his head and that’s before we learn about the big named mafia guys who are connected to van Zandt.
Much of the story takes place in Key West, where the theft and the trial take place.  Murry’s colorful description of Key West is well done, as are his noting of details of his characters, giving us a rundown of what they wear and drink.  We get a really good historical sense of the significance of the Audubon paintings, something Murry does well.  It’s also fascinating how easily these artistic treasures are taken.
Dancing with the FBI is one of the best parts of the story.  Murry explains his complex feelings about having already served his country in war and then having to serve his country to help catch the mob.  The trial where Murry testifies about his involvement in the Audubon Caper is really intense.  We see his having to think about himself and his new wife he hopes to be reunited with at the end of the story.  Murry has to outsmart van Zandt’s lawyer and many other players in the whole legal debacle.  We want to see him succeed and make it into the witness protection program as he is promised by the FBI.  Murry builds effective suspense at the end of his tale and we get a satisfying conclusion—partly because we know he lives to write about it.

Posted by conniesbrother.blogspot.com at 11:45 AM