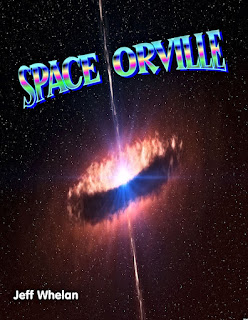 Jeff’s imagination took possession of my mind from the start of this space odyssey.  He invents characters, places, words, and scenes that could only have been produced with much time and effort.

Colors will pulse, turn into a glowballs, become liquid blankets, and smooch to name a few ways they are used.  Objects exist but you can’t see them; and they chuffled, wheebling, and merbled.  As you can see, he makes up words that flow well in the situation they're put, and make you laugh, because of their usage.
Space Orville, a sixteen year old, is out to catch the bad guy Bizmo while a host of characters are after the Weezle Bums.  They come together to search for the villains.

For me to try to describe the characters would do discredit to Mr. Whelan’s superb effort.  There’s NeutroFuzz, Space Orville’s side-kick who performs what Orville describes as amazing tricks, and then there are the General, Commander, and Ivan.  Lidweena and her Spoonies, Zabooka, and Miles are also contributors in trying to find the universal criminals.

We visit the land of the Reality Free Zone, Andorica, Narvosis and Selador to name a few.  I know I missed one or two, because there are many interesting places in Mr. Whelan’s universe of conscious,
subconscious, and dreams that we as humans traverse.  Examples are: Miles hands Space Orville the Fog Napkin, an instrument of life or death, saying, “Remember, that’s a lot of time you’ve got on your hands.”  Zabooka says to Space Orville’s group, “…You may not know which way you’re going, but that won’ stop you from getting somewhere.”

There are gadgets that are mind boggling.  And again, for me to describe them would be fruitless.  I’ll just say you will enjoy seeing hearing, and watching what they do through Mr. Whelan’s colorful and descriptive prose.