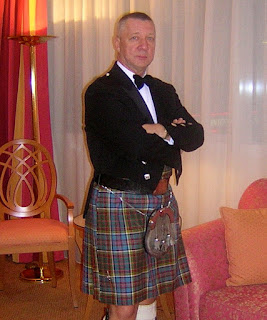 I like to look for the bright side of any situation, and am a passionate devotee of humor of all types, but particularly the droll dry Scots version. I've great respect for the intellect of other people as well as their foibles. None of us is perfect. I came from what others saw as the wrong side of the tracks, the shipyard slums of Glasgow, but my memories of them are among the most vibrant and colorful that I can recall, with a great sense of community back then, salt of the earth people, with a solid sense of what’s right and what’s not. That’s the bedrock of my own philosophy today. I've spent over 30 years working in various areas of the globe, from London, Hong Kong, Singapore, Sydney, Manila, and now in Abu Dhabi in the Middle East. The memories are multi-fold and provide lots of base material for my books.

A long, long time ago I wrote a short story called ‘The Storyteller’, about a man who makes up fantasy stories for kids, with magic frogs, tigers with upside down stripes, and teddy bears who explode when they eat too much. He dies thinking he’s not left any kind of legacy, but his stories have become legend, and so he lives on.

Like many of us, I find inspiration in diverse facets of life, but on the writing side I pick up on Dickens, and Sir Winston Churchill’s prodigious output. As a teenager, I worked under a Bank Manager in the Scottish Hebrides, named Angus Macintyre, who to me was a mix between Groucho Marx and Einstein, brilliantly insightful, humorous, witty man, full of humanity. He is my most unforgettable character.

A writer becomes God when in full flow. The pen, or the laptop key becomes a magic wand, making characters do anything you wish. LUV IT!

Can you tell us about your books?

THE VIOLIN MAN’S LEGACY and VENGEANCE WEARS BLACK are the first in a collection of at least five novels that spin around a trio of Ex-SAS commandos who form their own specialist security firm. The stories involve international crime, drug peddling, people trafficking, murders, arson, and all these cuddly things that bad people get up to when they’re not being angels. It’s not about the SAS a la Andy McNab, because being former commandos, these guys are not bound by the usual terms of engagement when they set about the bad lads.

How did you come up with the concept for these stories?

When I was in the Far East, part of my career involved looking after a troubled shipping company, which needed clearing out of peripheral criminal elements. During the course of that engagement, it was deemed necessary for me to have an armored car with a squad of bodyguards. These were trained by a former SAS officer who was a good friend into the bargain. I guess that’s where the concept started.

What genre best fits for the books?

Most definitely a real combination of crime, thriller, suspense, action, as well as police work. I’m an ‘all-inclusive policy’ author!

The third in the collection/series is already well under way as Work in Progress. I hope to have that up on Kindle by the end of November this year.

Do you have any tips for aspiring authors?

Yes. First of all stop ‘aspiring’ and ‘be’. If you write you are already an author. Get into it. Read as much as you can of authors you respect and who write in your genre(s). And these days, most importantly, recognize that writing the stuff is only the beginning. The ‘building the platform’ of a social media network is vital. Plus, get into the habit of helping other writers through Re-Tweeting on Twitter, sharing on Facebook and so on. “Paying it forward’ is a very gratifying feeling. The global writing family is the biggest-hearted bunch of guys and gals I've ever known.

Which authors inspire you?

I mentioned Dickens and Churchill above. Of my earlier reading, I doted on Steinbeck and John O'Hara  These days, it’s Lee Child and Stuart MacBride among many others .

At present, only via eBooks on Amazon Kindle.

Where can people find you on the internet?

I enjoy immensely interacting with readers and other writers through my blog: http://seumasgallacher.com/

Is there anything else you want to share with your readers?

A plea perhaps that will be echoed by most authors. We live and work for YOU, the reading community. We know it’s impossible for our work to fit everyone’s taste. That’s normal. However, regardless of whether you like or dislike what we write, posting a brief review (positive or negative) on the Amazon pages, for example, is the kindest thing you can do for an author, apart from patronizing his or her work. And finally, Roy, let me thank you for allowing me airtime on your blog. Much appreciated, Sir. Thank you.

Posted by conniesbrother.blogspot.com at 6:58 AM