From Paris with Love (Film) 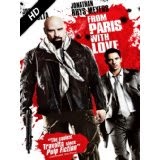 From Paris with Love (Film)

John Travolta has made over fifty movies of which I’m a fan. Since his stardom in Grease with one of my loves Olivia Newton John, I have seen a number of his movies, watching him mature as an actor.

In this film, he plays Wax, a highly qualified secret agent that is sent to France to investigate and neutralize a terrorist threat. The US Ambassador’s aid, Reese, played by Johnathan Meyers, has been trying to become an operative agent. He is directed by the agency to be Wax’s partner while he is in France.

Reese is having a love affair before Wax arrives and he doesn’t realize how deep of an affair it is. Kasia Smutniak, Caroline, is his fiancée and more. She is a sleeper agent for the other side.

Wax and Reese bond in an unusual way by following a murderous trail to the people who seem to be the center of terrorist plot. It’s an action packed route, where Wax shows Reese the techniques to survive as an agent, many of which are of the philosophy – KILL OR BE KILLED, no matter who the person is.

Reese has a good teacher and in the end it is not Wax who saves the day. It’s Reese who has to make the right decision which everyone would loath to make. This ending is a nail bitter.

This fast pace movie goes from one killing field to another. However, it was well choreographed so that the action not the blood was the scene.

The actors did an excellent job. I recommend it.  http://amzn.to/1stA2Wz

Posted by conniesbrother.blogspot.com at 7:05 AM