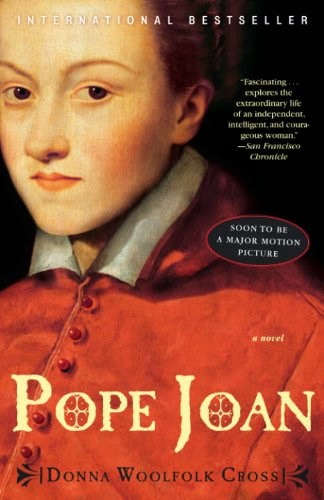 Between the years of 853 – 855 AD, there was a Pope after the death of Pope Leo IV who is left out of the Book of Pontiffs. In the history of Roman Catholic Church, the story of a person who reigned as Pope John is missing.

Ms. Cross brings to life the story of a young girl with an inquisitive mind in a period of time when women were considered to be without the capacity think. They were subservient to man according to “God’s Will,” and did as they were told.

Joan’s brothers are preparing to go to religious school, and she dares to ask why she can’t go to. Her elder brother takes pity on her and shows her the way that only men can go – school to learn the scriptures.

Thrilling and educational circumstances lead Joan through a labyrinth of events which graduates her status in a man’s religious clerical system that does not identify her as a woman. It is her knowledge accumulated over the years which elevates her to prominence as Lord of the Roman Church.

Her love of a man, which she vowed never to be complacent in, brings her, as Pope John, to her fatal end. Her demise as Pope is horrific, leaving no doubt of her sex

Well written, researched, and presented, Ms. Cross tells a tale, some would say is impossible to have happened according to limited records – the story is a myth. Donna Woolfolk Cross’ detailed story is a compelling vindication of the Pope Joan myth.

Decide for yourself. It is a read not to miss. Purchase at: http://amzn.to/1m2fwKY


Posted by conniesbrother.blogspot.com at 7:08 AM