Review of The African Queen 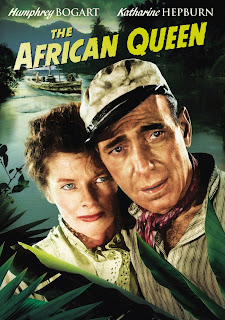 In the midst of war, sometimes strange bedfellows meet. The Africa Queen is a boat that brings two unlikely people together.

The man, Bogart, a small boat captain, and Hepburn, a Christian teacher come together in the middle of an African conflict brought on by the World War II conflict. They join to avoid the German intrusion into their life.

The two, after personality conflicts, become lovers, and the whole complexion of their survival is strengthened by their love for each other. Both have strong personalities that come across on the screen in superb acting.

I have seen both, and I disagree with the Academy Award. Katharine Hepburn should have won the award.

Posted by conniesbrother.blogspot.com at 7:51 AM