Review of The Bad Lady 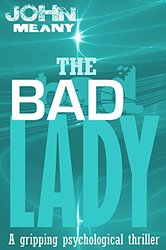 Children are the most vulnerable of any species. A mother protects and nurtures their precious ones, so they can grow up to be sane and healthy adults.

In John Meany’s The Bad Lady, a child ten years old is left on his own and in a situation that no child should be. He has conflicting feelings from unwanted physical contact to a so-called friend of his mother, who is living in a dual personality world.

The child's contacts mushroom into ongoing events where the child’s innocents are changed forever. After a ride in a Good Humor van, the child is in conflict and informs his mother. Her ‘Bad Lady’ side comes out, and the community they live in is changed into a war zone – Bad Lady against the Good Humor Lady.

The story goes into overdrive and leads to a fatal end. The child’s character narrates the beginning, middle, and the aftermath of a controversial topic –the problem of pedophilia.

Mr. Meany’s writing meets much of the criteria a well put together the story that will keep the reader interested. The only fault I could find, if it’s a fault at all, is that when the child’s character tells the story, he comes across as a well-informed adult.

Other than that, I found this psychological thriller, a read time well spent.

Review of The Green Room 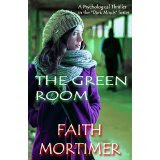 A well-known axiom is “Keep your friends close, but your enemies closer.” In Ms. Mortimer’s The Green Room, her protagonist Ella doesn’t know that her enemy is closer than one might believe.

Ella is living in an area where a serial killer is roaming. As a nurse in a local hospital, she tends to the sick and the physical pain that humans create. Her leisure time is with family, friends, and her boyfriend, who happens to be a police officer in search of the killer.

Ella’s knowledge of the events surrounding the rapes and her imagination leads to some interesting results. Her detective work uncovers information where two men are under investigation by her boyfriend.

The killer-rapist is close at hand; she knows. Convinced that the man who she just slept with and lived in the same building is the killer, she runs to the police officer. Then the truth comes out.

Faith Mortimer keeps the reader on edge throughout this thriller. Her character’s, especially Ella, are down to earth people caught up at the moment which leads the reader to believe the character’s conclusions.

When reading the prose, you feel the same as Ms. Mortimer’s characters. But when the ending arrives, and all revealed the astute reader could only say one thing, “Wow, I missed that.”


Posted by conniesbrother.blogspot.com at 2:04 AM No comments:

Review of I thought she'd be prettier 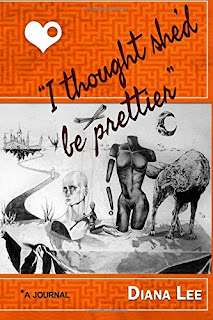 The United Nations rates the United States with the third highest divorce rate of 4.34% per 1,000 marriages. Of the richest countries on the planet, 53% of our marriages end up in divorce court. Other words, more than half of marriages in the USA end up divorced.

That said; we can put Diana Lee’s book/journal in perspective. The aspiration for that “Happy ever after” marriage is the fabric of most societies. Her protagonist is attempting to reach in her second marriage to a younger never-been-married man.

Ms. Lee’s main character Anna writes a journal explaining her one-sided interpretation of the events that transpired between her and her second husband. In the honeymoon stage of their bliss, they have two boys, and sex continues to be fantastic. I won’t delve into that; I wasn’t there.

Anna tells us of Sammy and his faults but never lets the reader understand hers. It might give the reader some insight into why he did some stupid things – funny at times and hurtful others  So be it. No self-analysis was included.

The writer of this journal goes on to tell us how she came across finding out her husband’s infidelity with maybe two women. She becomes a self-made detective to the end, while still living in the fantasy world of what I call the “Soulmate syndrome.” Wasn’t her first husband her soul mate at one time?

The writing was charming and comfortable to read, but a little wishy-washy. It’s wishful thinking that women are to believe that Mr. Right exists – he doesn’t. You gotta make do with what you got and be happy he comes home to you each night.