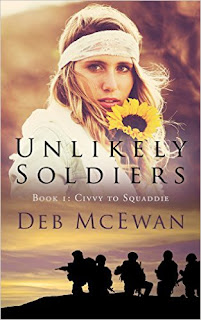 There are many reasons why people join the Army. I, for one, was drafted in the Vietnam era and re-enlisted a month in, to get an education before going to Nam. Deb McEwan’s story a la novella follows the lives of a few who decide to join the British Army.

Her series starter has all the elements a good book one should have. The three most important characters' stories are developed, their adventures are interesting, and you are left with a ‘What comes next’ need to know at the end.

Guy, overwhelmed at home with his mother’s inconsiderate and a new overbearing stepfather, wants freedom from his situation joins the Army to pursue a career that is contra to his father's. Michelle, who is confused with her home life, wants to follow the steps of her brother Graham and get out of the town. All were not of age when joining.

Ms. McEwan’s experience of thirty-odd years in the British Army has given the reader a colorful look into what happens to a recruit in basic training. The three mentioned going through a learning curve that will have you laughing and rooting them.

Their personalities will lead the reader to want to follow their future love affairs and Army endeavors. Unlikely Soldiers, Book #2, should be as enjoyable as #1. It’s on my reading list.


Posted by conniesbrother.blogspot.com at 4:04 AM