Review of Between the Vines 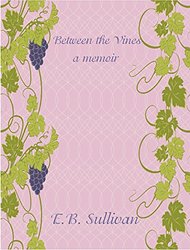 Between the Vines
a memoir

Being a wine drinker, I found the production of it, as a backdrop of a love story fascinating. The planting of embryo vines, taking them to fruition, and then developing a particular type of wine, is a love affair only a few can understand.

Ms. Sullivan’s main character, Lucia, has an Italian immigrant mother and father, whose love is captured in the way they live in producing the fruit of the vine into wine. Lucia tells her story, her memoir, of how their love for her, her brother Marco, and of their devotion in living Between the Vines.

Telling her story, she explains how her parent’s commitment helped develop her character and the decisions she made in route to maturity like the vines that produce on their precious Vino Baci Vineyard. Like the vines’ production, Lucia’s life has difficulties that must be overcome to produce a loving conclusion within her family.

Lucia’s trials and errors in her personal life do co-inside with her new understanding of winemaking. Devoted to the family’s vineyard, she comes close to losing her husband, whose allegiance is to her and to another profession that takes him away from the vineyard on long business trips.

Between the Vines has its highs and lows, but it's even-keeled in the story’s flow. This memoir is a well worth read on many levels, especially if you are a wine drinking romantic like me.

Posted by conniesbrother.blogspot.com at 7:06 AM