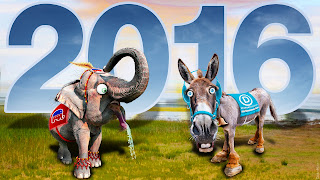 A Psychological Warfare Interpretation
Of 2016 Primaries

Insight
I am going to give you a little insight as to where I am coming from, before explaining my opinions of the United States' Presidential Election of 2016, using a journal format.
I am a novice at political endeavors, so my vocabulary will be non-political. I will try to be informative, sometimes funny, and as evenhanded as my personal bias will allow me to be.
Having never participated in the election process nor ever supporting any candidate for president, I voted only in the general election. As an independent or non-declared party member, I could not vote in the primaries. When voting in the general election, I flipped a coin – heads Republican tails Democrat and then voted based on the result.
The process worked for me because I believed it didn't matter since to me all politicians were liars, who spouted platitudes that in the end never came to fruition. The other reason was the Congress was packed with these same types of politicians from other States, who were so diverse, that they couldn't agree on most things important to the country.
This time around I am looking at the Presidential primaries in a different way.  Using my training in psychological warfare, I will evaluate the primary elections through a different magnifying glass.
Having graduated from John F. Kennedy Psychological Warfare Center, Fort Bragg, North Carolina, while serving in the US Army, I became one of our military's finest – a Green Beret in 1969. My MOS, Military Occupational Specialty, was 11F25VS or Infantry Operations and Intelligence Specialist.
In Vietnam, I worked for the last nine months at 5th Special Forces Group, Headquarters, Nha Trang. What I did my first four months in the country can only be described as super psychological warfare – top secret. I dropped my dog tags and went on a mission.
For my service to my country, I received a Bronze Star for Meritorious Achievement in intelligence work by setting up operations that psychologically affected the enemy. I am not going into detail because we lost that endeavor, but because I don't feel comfortable telling you what we did. The enemy did worse than what we attempted or completed, and they were victorious.
The lessons we learn when we are young and having lived through war tend to stay with us. In my case, the study of operations and intelligence about psychological warfare became part of my mental fiber. Those techniques I have used thought-out my life. I graduated from college after Nam; working for my local government of Lowell, Massachusetts for a short period; becoming involved in a major crime, and later put on the witness protection program because of my choice, and participating on many levels of international business before I retired.
I will write in my journals what I think about the Presidential candidates' actions, using what I believe are the turning points in the primaries from a psychological warfare point of view. My opinions will not be pretty and will offend many on both sides of the aisle. However, I will try to be fair.
I have been sitting here in our home/office for the last two month's working and watching the political repartees on CNN TV of those who want to rule the United States of American as President. It's not my normal behavior, but I share the office with my friend and supervisor, who love politics.
I prefer to listen to soft music while performing my job as social media director of a non-profit. I won't name her or give her opinion because these are my words, ideas, and interpretation of the events surrounding an important part of our history.
I am a US Citizen, living in the State of Florida. My supervisor is also;, and we conversed about the ongoings of the Republicans and Democrats. Her words and opinions will not use in this journal.


Posted by conniesbrother.blogspot.com at 8:24 AM