Review of Rules of the Earth 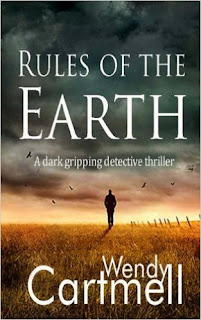 Rules of the Earth: a dark
disturbing detective thriller

Sgt. Major Crane, an ex-military investigator, comes out of medical retirement and teams up with his police detective friend DCI Anderson to solve an English city’s mystery – a girl is found walking the streets, with an identity problem. She is also frightened out of her mind and doesn’t speak.

Under his jurisdiction, Anderson is baffled by the crime and asks Crane to help. In their first endeavor, with Anderson as the boss, Crane adds a new dimension to Anderson’s investigation team which seems to be lacking in ability.

This thriller dabbles into the occult that has produced the crime the child has survived. Then another child has been affected. Leading the team to fear, more children may be at risk.

The devil is closer than one may think. He is in a breakdown mode due to the fact he feels overwhelmed by his cult’s cohort’s inability, his family member’s pestering, and his unproductive work habits. In his breakdown, Crane and Anderson have their suspicions but can’t put their finger on the problem.

An unpredictable event occurs; Crane and Anderson go into action, and a thrilling ending leads you into the next book in this (Crane & Anderson Detective Series.) It’s as good as the Crane Series. Thumbs Up.

Posted by conniesbrother.blogspot.com at 1:52 AM