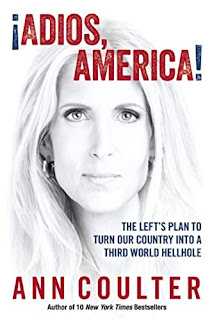 Let me start by saying I am an Independent voter. I read this political book with limited political knowledge or interest in same.

Ms. Coulter's discourse is about where the United States of America is heading because of its immigration's policy (Legal or illegal). She details where we are, what is happening, and where we are going if we stay on the path we are following albeit before the election of Donald J. Trump as President of the USA.

I was overwhelmed by the information she outlined and chronicled using notes of accurate reports. If half of what she says is true, this country has been on the wrong path as far as immigration is a concern. And, if that path continues, America as we have known it will cease to exist.

The prose was somewhat above my political knowledge but was easy to comprehend with a little investigation on my part. The flow moved along smoothly and was enjoyable to read.

I feel this book is important to read if you care to understand Mr. Trump's lauding it and putting some of its principles into his policies while running for President, which was well received.

Posted by conniesbrother.blogspot.com at 1:54 PM