Review of Daughters of the Dragon 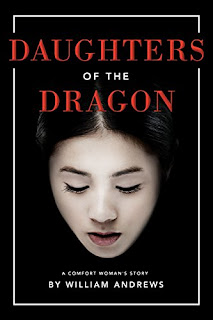 DAUGHTERS of the DRAGON
A Comfort Woman's Story

Mr. Andrews' historical novel of Korea and one of the many atrocities of war inflicted on it by Japan during World War II and continued through the Korean War is an eye-popping reality, the abuse of women and children. The Japanese take Jae-hee, fourteen, and her sister, sixteen, from her mother to work as comfort women, sex conduits for their soldiers, during the World War II.

In Daughters of the Dragon, a golden comb becomes an instrument of hope in Jae-hee's horrific journey through the depravity of dominance by ill-educated men. Jae-hee tells her family's story giving her grandchild a history lesson years later.

The close to violent events that play out in that story will have the reader thinking as to how the Japanese could inflict such crimes against Koreans, knowing how docile they are today. However, they did, and that is still a deep-seated mindset in North and South Korea's psyche, I believe.

Mr. Andrews writing style is smooth explaining this Korean experience that few know. Unfortunately, it is a story repeated and hidden throughout history about wars. Women and children of the opposite combatants become commodities in the quest to win the war or conflict.

Purchased at:  http://amzn.to/2haqJsh For background on author and Comfort Girls: http://bit.ly/2wlWjxL

Posted by conniesbrother.blogspot.com at 3:41 AM