Review of Lady of Conquest 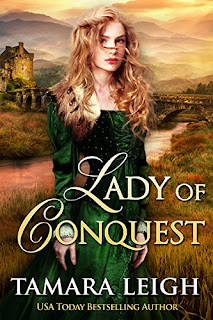 "Keep Your Friends Close, But Your Enemies Closer," is a saying that is appropriate to describe the Lady of Conquest's main character, a Norman knight who was part of the invasion of 1068 Saxon's England. Knight Maxen keeps Lady Rhiannyn, a Saxon, close until he can find out who killed his brother. He died in her arms, and she doesn't know who threw the knife that did the deed.

The crux of the story is how close they get after many conflicts and disputes they and their countrymen have. Maxen and Rhiannyn learn that their people, as well as themselves, have common ground that can be built on.

Rhiannyn's beauty and her ability to sway Maxen’s strong-minded ebullient positions to do the right thing on many levels bring the two together over a period. Killings stopped, and a bright future is over the horizon happens when they bond to change the King's mind.

This medieval romance is not a normal one with its culture conflicts. I believe that the proper English language and decorum are used but not overwhelmingly.

Lady of Conquest is an enjoyable love story to read.

Posted by conniesbrother.blogspot.com at 3:44 AM