Review of WITH ALL DUE RESPECT 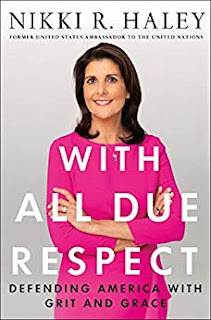 WITH ALL DUE RESPECT
Defending America with
Grit and Grace

WITH ALL DUE RESPECT, if you don't read this novel, you will be missing a historical look into President Donald J. Trump's foreign policy by the former United States Ambassador to the United Nations. Her story is compelling, controversial, and believable, putting politics aside.

Ambassador Haley, an Indian woman, who was Governor of South Carolina, with no experience in world politics shines on the world stage where men have ruled for a millennium. It is her true grit and inner abilities that helped her navigate through the world political conflicts the USA has encountered for years.

These struggles of ideas, in everyday language, she writes with contention, grace, and dignity professing America's morals to the world is the critical theme I took from this reading. This story will have you cheering and bewildered at the same time.

World views are different, but we must come to a common ground is the backbone of her philosophy. 'I agree' is the reason for placing it here. ,

You will have to read WITH ALL DUE RESPECT to understand why President Donald J. Trump picked Kikki Haley to be Ambassador. She has John Wayne's TRUE GRIT.  Youngsters and foreigners may have to Google it.

WITH ALL DUE RESPECT https://amzn.to/2Qe31gn

Posted by conniesbrother.blogspot.com at 3:13 AM